Musée d'Orsay, viewed from across the Seine, © Nicolas Sanchez, photographer
(click on image to enlarge)

Situated on the Left Bank of the Seine River in Paris' 7th arrondissement, the Musée d'Orsay is a fabulous turn-of-the-century building – formerly a railroad station – which was converted into a spacious venue dedicated to art.

For many years, Paris' collections of 19th-century art were distributed among the Louvre, the Musée d'Art Moderne, and the very crowded rooms of the small Musée du Jeu de Paume, with its unsurpassed impressionist masterpieces.

In 1986, these collections were transferred to the Orsay. Thousands of paintings, sculptures, objets d'art, items of furniture, architectural displays, even photographs and movies, illustrate the diversity and richness of 19th-century art, including not only impressionism but also realism, postimpressionism, and art nouveau.

The rue de Lille was once the central axis of a garden belonging to Henri IV's famous queen, Marguerite de Valois. Upon her death in 1615, the property was sold by lots, and private mansions continued to build up the neighborhood, while on the banks of the Seine a port known as the Grenouillière (literal translation: frog pond) served as a resting place for lumber barges and other cargo. 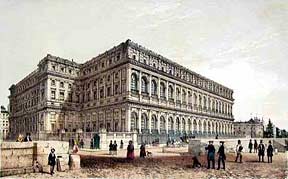 View of the Palais d'Orsay and Légion d'Honneur,
by Philippe Benoist (1813 - 1905)
Lithograph, watercolored
© Galerie Saxonia, All Rights Reserved
(click on image to enlarge)

Construction of the Quai d'Orsay began in 1708 near the Pont Royal, and was completed a century later under the Empire of Napoleon I. The aristocratic atmosphere of the neighborhood was already well established by the end of the 18th century, when the Hôtel de Salm – today the Musée de la Légion d'Honneur – was built by the architect Pierre Rousseau for the German prince Frédéric III de Salm-Kyrbourg, between 1782 and 1787.

During the 19th century, two buildings were erected upon the site of the future Orsay station: the Cavalry barracks and the Palais d'Orsay, built between 1810 and 1838 successively by Jean-Charles Bonnard and Jacques Lacornée. Although the palace had originally been planned for the Ministry of Foreign Affairs, it eventually housed the Cour des Comptes (Court of Accounts, or Auditors) and the Conseil d'Etat (State Council). 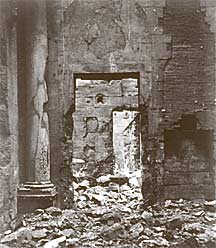 The entire neighborhood was set ablaze during the violent upheaval known as the Paris Commune; the Palais d'Orsay burned down during the night of 23 to 24 May, 1871. Author Émile Zola described the fire thus in La Débâcle:

"An immense fire, the most massive, the most appalling – a giant cube of stone, with two-story porticoes, was spewing flames. The four buildings, which surrounded the great inner courtyard, had caught fire at once; and then the oil poured down the stairs to the four corners, streaming along the steps like torrents from hell."

For nearly three decades, the ruins of the Palais d'Orsay remained there, serving as a reminder of the horrors of civil war.

In anticipation of the 1900 World's Fair (l'Exposition Universelle), the French government ceded the land to the Orléans railroad company (Compagnie du Chemin de fer de Paris à Orléans, abbreviated as "P.-O."), who, disadvantaged by the remote location of the Gare d'Austerlitz, planned to build a more central terminus station on the site of the ruined Palais d'Orsay. 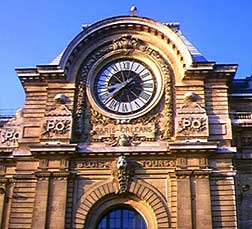 In 1897, the company consulted three architects: Lucien Magne, Emile Bénard and Victor Laloux. The project was a challenging one due to the vicinity of the Louvre and the Palais de la Légion d'Honneur: the new station needed to be perfectly integrated into its elegant surroundings. Victor Laloux, who had just completed the Hôtel de Ville in Tours, was chosen as winner of the competition in 1898.

The station and hotel, whose construction took only two years, were inaugurated for the World's Fair on July 14th, 1900. Laloux chose to mask the modern metallic structures with the façade of the hotel, which, built in the academic style using finely cut stone from the regions of Charente and Poitou, successfully blended in with its noble neighbors.

Inside, all the modern techniques were used: ramps and lifts for luggage, elevators for passengers, sixteen underground railroad tracks, reception services on the ground floor, and electric traction. Since steam power was not allowed in the long tunnels, train cars were shuttled from Gare d'Austerlitz using small 600-volt electric locomotives, known as "boîtes à sel" – salt boxes. [see picture]

From 1900 to 1939, the Gare d'Orsay was the head of the southwestern French railroad network. The hotel received numerous wealthy travelers in addition to welcoming associations and political parties for their banquets and meetings.

However, starting in 1939, the station was to serve only the suburbs – as its 135-meter platforms had become too short for the modern, longer trains that appeared with the progressive electrification of the railroads. By 1958, the suburb routes were also abandoned.

From Station to Museum

During the years after 1939, the Gare d'Orsay served a number of different purposes: it was used as a mailing center for sending packages to prisoners of war during the Second World War, then welcomed those same prisoners at its platforms upon their return home following the Liberation.

The abandoned station was also used as a set for several films – including Franz Kafka's The Trial adapted by Orson Welles (1962), and a few scenes in Bertolucci's The Conformist (1970). For a time, the building provided a haven for the Renaud-Barrault Theatre Company and for auctioneers, while the Hôtel Drouot was being rebuilt.

The hotel closed its doors on January 1st, 1973 – though not before having played a historic role: General de Gaulle held a press conference in its ballroom (the Salle des Fêtes), announcing his return to power on May 19th, 1958.

By 1973, at the urging of Georges Pompidou, the Direction des Musées de France was considering the installation of a new museum in the train station – in which all of the arts from 1848-1914 would be represented, thereby relieving the overcrowded facilities at the Louvre, Jeu de Paume, and other locations. 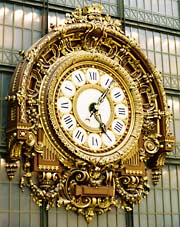 The station had been threatened with demolition and replacement by a large modern hotel complex, designed by the architect Guillaume Gillet-René Coulon. Instead, it benefited from a revival of interest in nineteenth-century architecture, and was listed on the Supplementary Inventory of Historical Monuments on March 8, 1973.

The official decision to build the Musée d'Orsay was taken during the interministerial council of October 20, 1977, under the initiative of then-president Valéry Giscard d'Estaing. The building was classified an Historical Monument in 1978, and a civil commission was created to oversee the construction and organization of the museum.

After a period of interminable wrangling with the curators, worsened by interference from the president, the renovations were finally completed – albeit three years behind schedule, and millions of francs over budget. On December 1st, 1986, the new museum was inaugurated by the President of the Republic, François Mitterrand. It opened to the general public on December 9th.

NEXT PAGE » The Architecture